During our 2021 neighborhood-wide block party, Pat and JP were presented with the 2021 Neighborhood Hero Award. As longtime residents, they epitomize the spirit of generosity in Tower Grove Heights — from JP’s two terms as president of the Tower Grove Heights Neighborhood Associaion to his popular stint as the Good Humor Man at our 30th Anniversary Block Party and Pat’s countless hours spent volunteering for block parties and Autumn Fests to her efforts organizing the Officer Bohannon Memorial bench in Tower Grove Park, this couple is deserving of our highest honor. Congratulations!

After a year of quarantining due to COVID-19, neighbors were ready to get together at the 2021 neighborhood-wide block party!

The life of slain Officer Tamarris Bohannon was honored with a bench dedicated to his memory in Tower Grove Park, just west of the Chinese Shelter, on Friday, September 10, 2021.

Second District Officer Bohannon was shot in the line of duty while responding to a call for service on the 3700 block of Hartford and died on August 30, 2020. He is survived by his wife, Alexis Bohannon, three young children and extended family. He was 29. Officer Bohannon made the ultimate sacrifice to protect and serve our neighborhood and we are forever grateful to him and his family.

Longtime Tower Grove Heights residents, Pat Edwards and Veronica Campbell, originated a plan to dedicate a memorial bench and worked with the Tower Grove Heights Neighborhood Association and Safety Committee to raise $5,000 to cover the cost of the bench. Thanks to the overwhelming generosity of neighbors and friends, almost $10,000 was raised, allowing for both the bench and a substantial contribution to the family.

The event was attended by members of Officer Bohannon’s family, many fellow officers, including Captain Christi Marks, Commander of District Two, friends, and neighbors. Mrs. Bohannon was escorted by TGHNA Safety Committee member, Jennifer Florida, where she was presented with a check by TGHNA President, Patrick Weber.

Block Captain Nigel Holloway received the Matt-the-Cat Award for his recent organization of the Spring Extravaganza Alley Clean-Up Blitz in the alley between 3600-3700 Hartford and Juniata, however, Nigel’s engagement with the neighborhood extends far beyond this single event.  He is also a frequent contributor to the Gazette, our neighborhood’s quarterly newsletter; has organized block parties for his block, 3600-3700 Hartford; volunteered to assist with voter registration at the booth in Ritz Park; created a non-partisan voter education Facebook page; and registered to become a notary in order to help voters notarize their mail-in ballots at no charge. He is an active, engaged and responsive resident who regularly attends TGHNA meetings and events and whose ongoing participation in the Tower Grove Heights neighborhood is recognized and valued. Indeed, a well-deserved honor to a worthy recipient – congratulations, Nigel!

Both alleys flanking 3800 Humphrey were spiffed up thanks to Block Captains Ralph Groom and Jay Diamond (Humphrey) and Andrea Thein and Barb McDonald (Wyoming) who coordinated their respective blocks.

Noticing how many new families they’d seen around the neighborhood, Caroline May (3600 Humphrey) and Beth Doriani (3800 Utah) decided to organize a meet and greet at the South Cypress Pavilion in Tower Grove Park. They posted the event on the Tower Grove Heights Community Facebook Group and voilà! Despite a few sprinkles, several families turned out for a fun afternoon with beer, snacks and games.

On a chilly Saturday in April, neighbors came out to help clean up the alley, starting with the commercial dumpster corral between Ritz Park and the building that housed the former Mangia restaurant.

This blitz was over a year in the making! Nigel Holloway, Block Captain of 3600-3700 Hartford had planned the clean-up a year ago last March but the pandemic put it on hold. When it was finally possible to clean and weed in a socially distanced way, Nigel registered the activity with Brightside STL, which provided shovels, rakes, brooms, trash bags, and gloves, and at last, the blitz was on. Many, many thanks to Nigel and the 10 or so neighbors who helped out!

Rocky Keel, Nigel Holloway and Jane Keel take on the refuse corral at the east end of the Hartford-Juniata alley

It takes a village – Elizabeth, Izzy and Penelope get into the blitz spirit!

The Tower Grove Heights Neighborhood Association and the entire neighborhood we represent expresses its deep support and concern for our neighbors who were forced from their home in an incident that led to a 12-hour standoff on the 3700 block of Hartford on August 29-30, 2020.  The home sustained substantial damage as the police used multiple rounds of tear gas before the gunman finally surrendered.  We thank everyone who has lent support and prayers. The family is also thankful for all the community support and have stated that their strong faith has and will help them through the ordeal.

We also express our gratitude to the St. Louis Metropolitan Police Department and share their grief in the death of Officer Tamarris Bohannon, 29, who was with SLMPD for three and a half years.  He was a model officer who genuinely wanted to serve the community.  He leaves behind a wife and three young children.  We also hope for the speedy recovery of the other officer who was shot in the leg.

The St. Louis Metropolitan Police Department has stated on behalf of the Bohannon Family, in addition to donations made to BackStoppers, the Bohannon Family has set up the “Officer Bohannon Memorial Fund” at First Community Credit Union.  Details on donating to this fund can be found at firstcommunity.com/about-us/community-involvement. There are no online fundraisers endorsed or approved by the Bohannon Family.

Donations to BackStoppers, an organization that provides ongoing needed financial assistance and support to the spouses and dependent children of all police officers, firefighters and publicly-funded paramedics and EMTs in their coverage area who have lost their lives in the line of duty, can be made at backstoppers.org.

We are a strong and resilient neighborhood and had initially planned to host a fundraiser for the family on Hartford, but due to COVID-19 restrictions, we are unable to host an in-person event. However, if you would like to donate to the family, click on the DONATE tab on the homepage – 100% of these contributions will go directly to the family. Many thanks, in advance, for your generosity. Please note, NO GoFundMe accounts or other fundraisers have been set up by or approved by the family.

Tower Grove Heights Neighborhood Association is a 501(c)(3) nonprofit organization founded in 1989 that values and seeks a diverse membership.

The TGHNA Board recognizes and values the importance of inclusion.

NOTE: If you need to notarize your absentee ballot, please contact TGH Block Captain and notary, Nigel Holloway. To secure an appointment, email him at STLNotaryHub@towergroveheights.com.

At the last meeting of 2019, TGHNA surprised Debra Knox Deiermann and Barbara Gilchrist with the Neighborhood Hero Award for all they do to support and promote the neighborhood.  Debra served as Secretary of TGHNA for four years and currently coordinates the TGS-TGH Block Captains, something she has done for many years.  She is also the copy editor for the Gazette, serves as the Chair of the Communications Committee and is on the Safety Committee.  Barbara served three years on the board as President-Elect, President and Past-President and is also a member of the Safety Committee.  She is now Co-Editor of the Gazette.  Both find time to participate and volunteer in some way at every event sponsored by the neighborhood.  They excel as champions of Tower Grove Heights.

Chris Peper was awarded the Matt-the-Cat award by TGHNA President Ryan Barry for his longtime service to the neighborhood.  Chris is a thoughtful and all-round good neighbor – he is often seen around the neighborhood trimming overhanging branches in the tree lawn that impede sidewalk traffic or picking up trash à la Susie Gudermuth.   He has been a frequent attendee of Autumn Fest and various Heights Nights events.  Recently, he volunteered to bring trash and recycling receptacles to the 2019 neighborhood block party.  Congratulations, Chris! 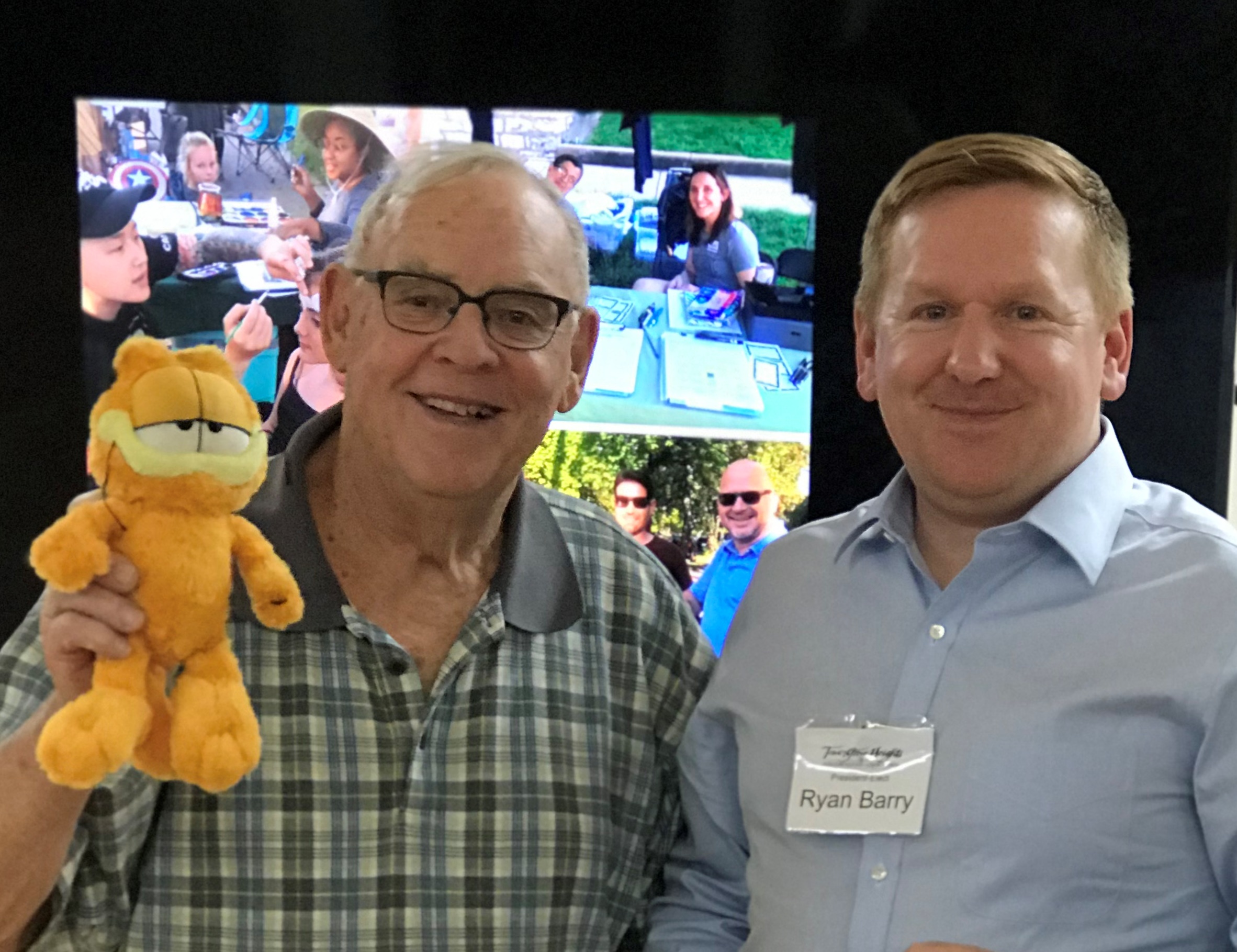 Two years ago, we celebrated the 30th anniversary of Tower Grove Heights Neighborhood Association with a wildly successful block party.  Because of that event’s immense popularity, we decided to annually alternate a neighborhood-wide block party with our other outstanding event, Autumn Fest.  Thanks to the hardworking committee who organized it and to all the volunteers, donors, and attendees who made it come together!  Check out the photos below! 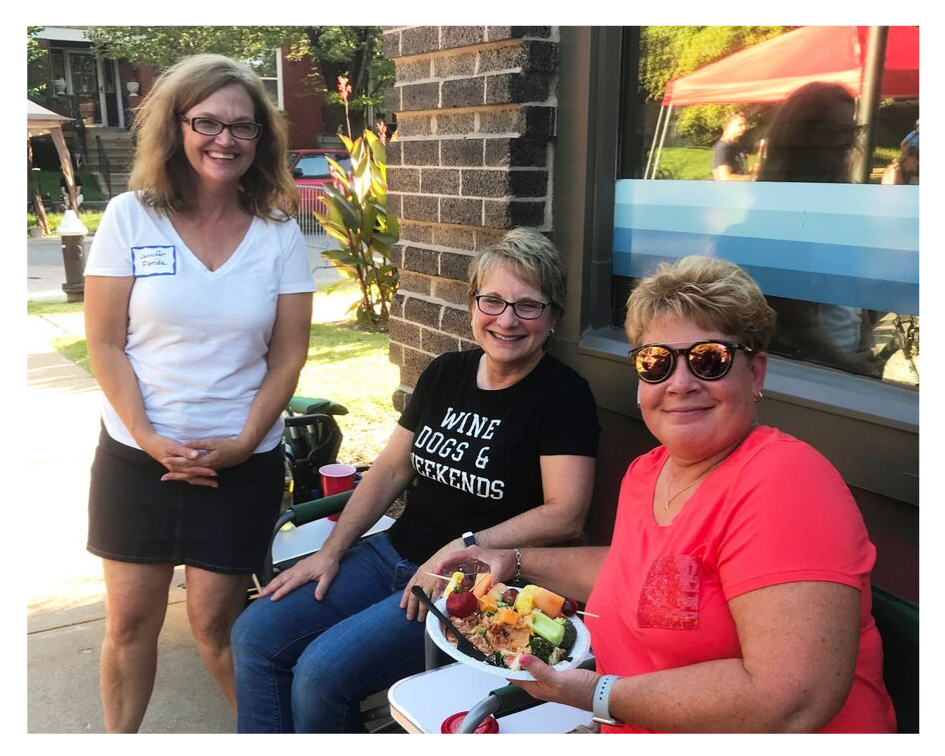 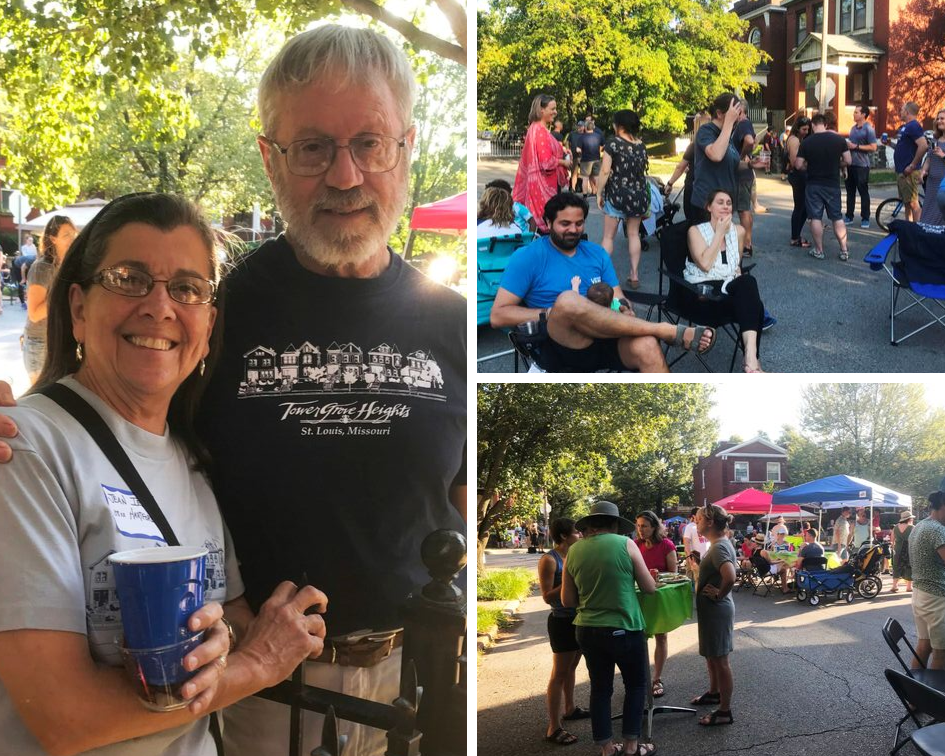 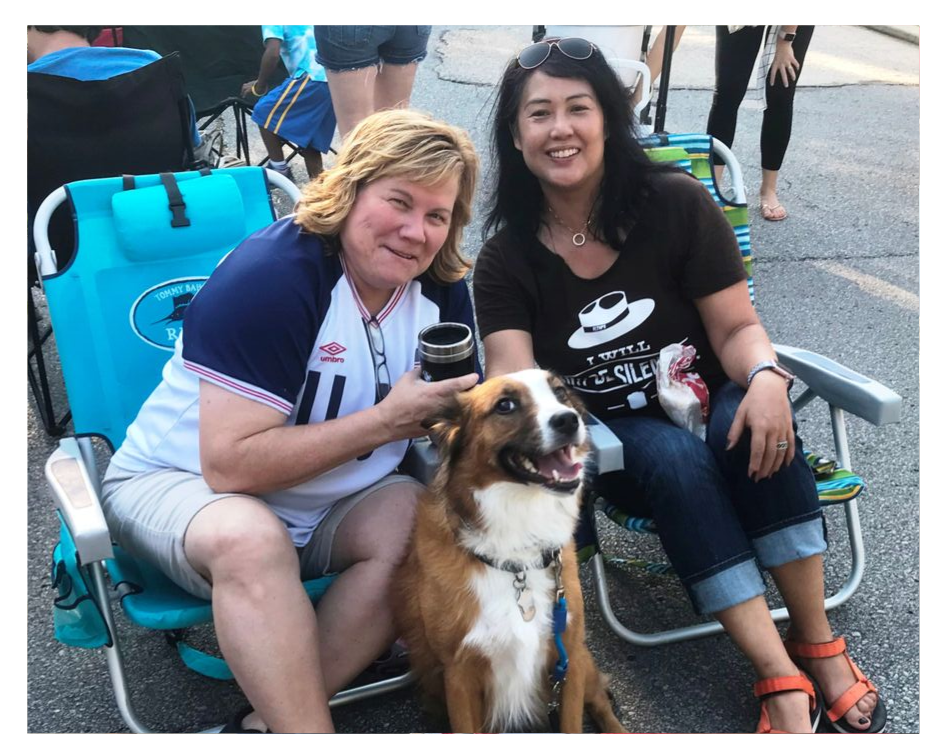 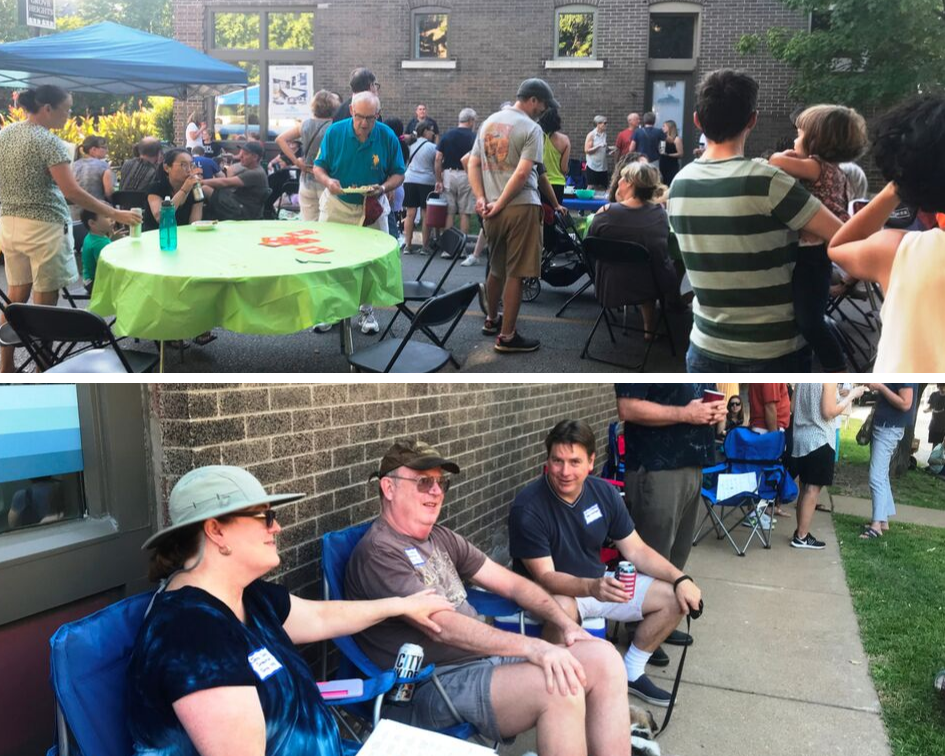 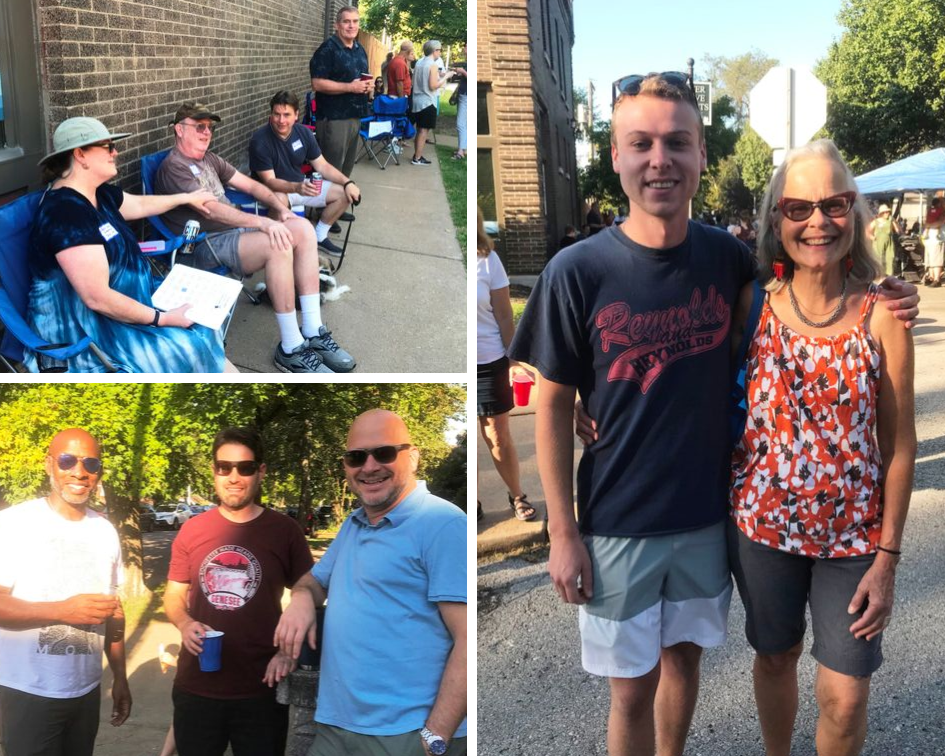 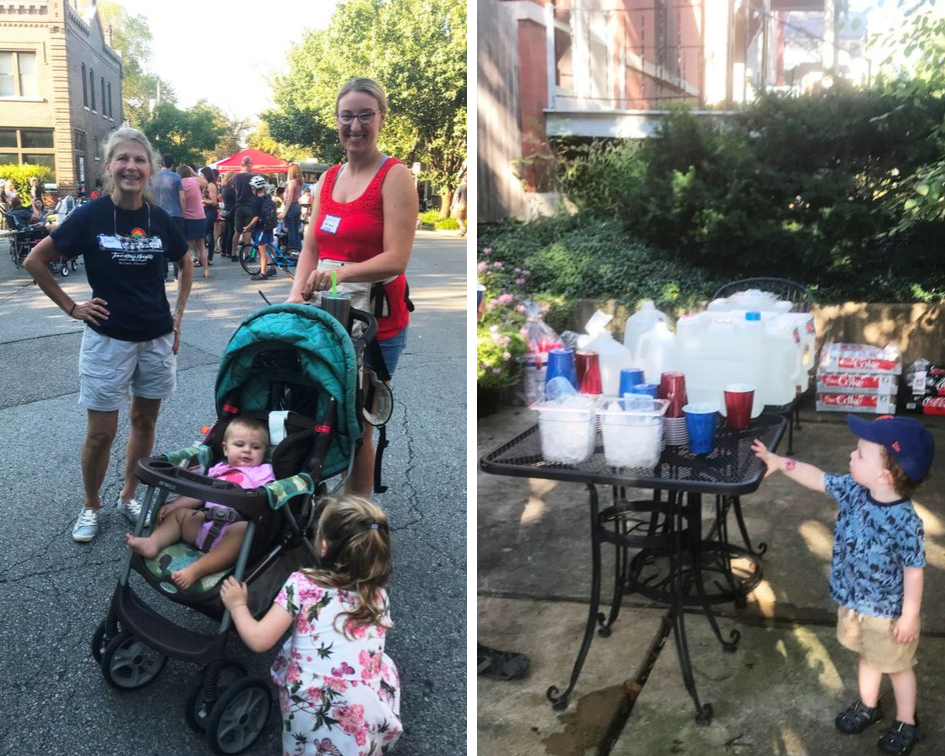 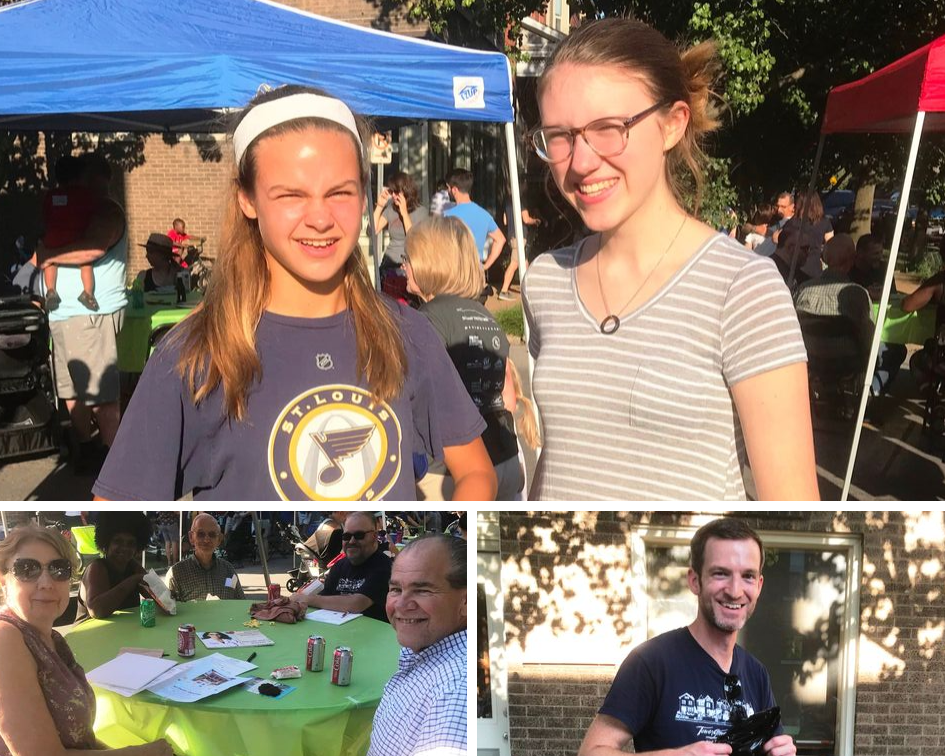 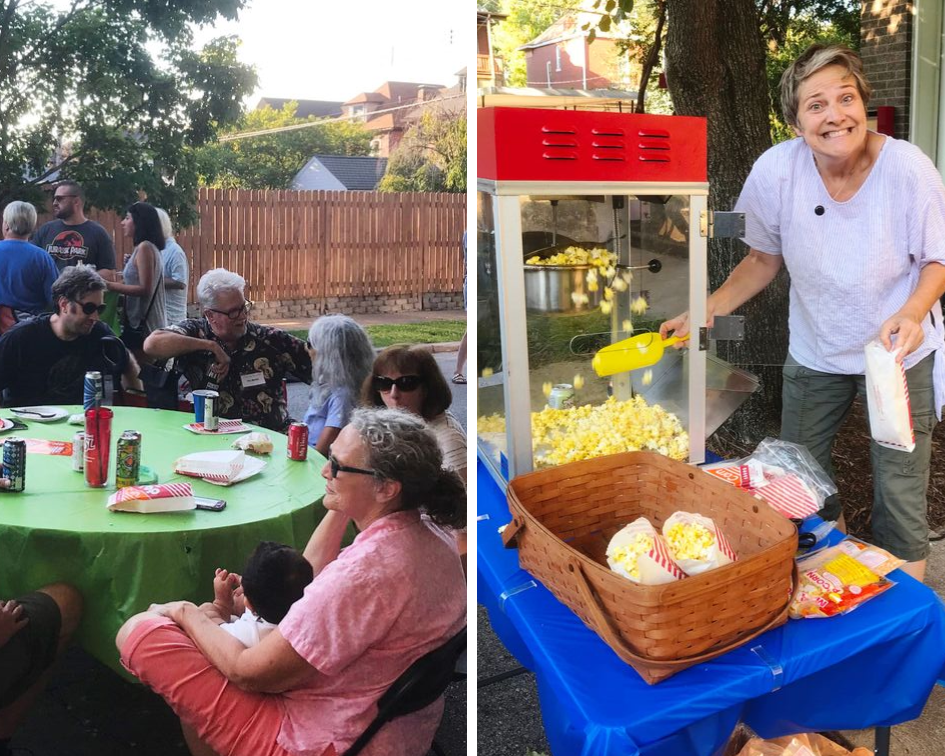 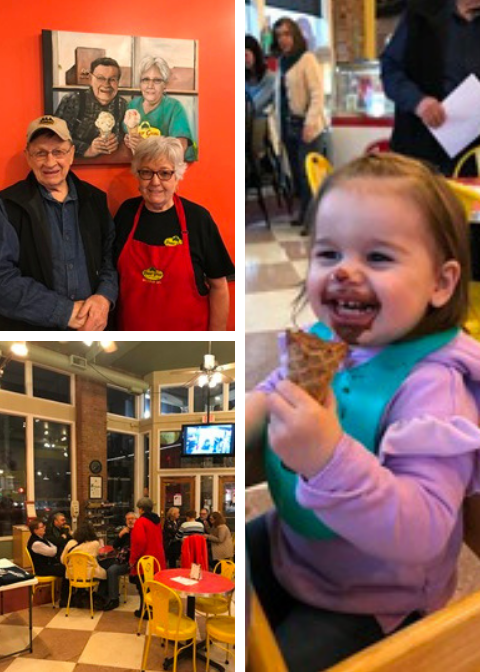 Many thanks to long-time supporters of TGHNA and the entire Tower Grove neighborhood, Dave and Beulah Ann McCreery, owners of Tower Grove Creamery, for hosting our Ice Cream Social event!  A good time was had by all!